Apache Spark is a fast and general engine for large scale data processing. It is written in Scala, a functional programming language that runs in a JVM. It provides high-level APIs in Java, Scala, Python and R, and an optimized engine that supports general execution graphs. You can use Spark through Spark Shell for learning or data exploration (in Scala or Python, and since 1.4, in R) or through Spark Applications, for large scale data processing (mainly in Python, Scala or Java).

Example of starting pyspark on a Cloudera distribution:

The fundamental unit of data in Spark are RDDs (Resilient Distributed Dataset). They are resilient because if data memory is lost, it can be recreated; they are distributed because data is stored in memory across the cluster. Initial data of dataset can come from a file or be created programmatically.

There are three ways to create and RDD:

A RDD is an immutuable distributed collection of data, which is partitioned across machines in a cluster. Most Spark programming consists of performing operations on RDDs . There are two types of operations:

Spark depends heavily on the concepts of functional programming, where functions are the fundamental unit of programming. Functions have input and output only, no state or side effects. Many RDD operations take functions as parameters. A typical pseudocode for a RDD operation, for example, the map operation is:

Functions are defined in line without an identifier. This is suppoerted in many programming languages as Scala, Python or Java 8. For example:
Python

The following illustration summarizes the terminilogy of Sparks on Job executions.

A job is a set of tasks executed as result of an action. A stage is a set of tasks in a job that can be executed in parallel. A task is an individual unit of work sent to one executor over a sequences of partitions. RDD operations are executed in paralell on each partition. When possible, task execute on the worker nodes where the data is in memory. Some operations, such as map, flatmap or filter, preserve partitioning and other operations repartition, such as reduce, sort or group.

Operations that can run on the same partition are executed in stages. Task within a stage are pipelined together. There are two types of operations:

The following illustration depicts the different components of Spark. 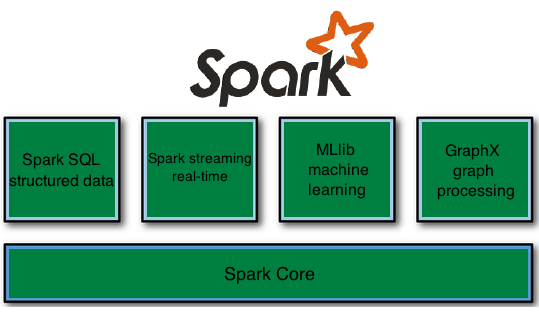 Spark SQL provides a convenient way to run interactive queries over large data sets using Spark Engine, base on a special type of RDD called SchemaRDD. SchemaRDD has been renamed to DataFrame. A DataFrame is a distributed collection of data organized into named columns; it is similar to a table in RDBMs. DataFrames can be converted to RDDs by calling the rdd method which returns the content of the DataFrame as an RDD of Rows. Data sources for DataFrames can be external databases, hive tables, existing RDDs, JSON datasets or structured data files.

Spark SQL provides two types of contexts: SQLContext and HiveContext that extend SparkContext functionality. SQLContext encapsulates all relational functionality in Spark. It is a simple SQL parser. HiveContext provides a superset of the functionality provided by SQLContext. It can be used to write queries using the HiveQL parser and read data from Hive tables. You don’t need an existing Hive environment to use the HiveContext in Spark programs.

Spark streaming is an extension of core Spark that provides real-time processing of stream data. Support Sacala, Java and Python. It divides up data stream into batches of n seconds and processes each batch as an RDD. The results of RDD operations are returned in batches. Spark streaming uses DStreams, Discritized Stream. A DStream is a sequence of RDDs representing a data stream. Each RDD contains data received in a configurable interval of time. DStreams are created by StreamingContext in a similar way to how how RDDs are created by SparkContext. DStreams are defined for a given input stream, for example, Unix socket. They are also prepared out of the box for other networks sources such as Flume, Akka Actors, Twitter, Kafka, ZeroMQ, etc. and for monitoring folders and files (for example, new files in a directory).

GraphX unifies optimized graph computation with Spark’s fast data parallelism and interactive abilities. GraphX unifies ETL, exploratory analysis, and iterative graph computation within a single system. You can view the same data as both graphs and collections, transform and join graphs with RDDs efficiently, and write custom iterative graph algorithms. You can use GraphX for problems on the relationships between the individual data items. For example, social networks, web page hyperlinks and roadmaps. These relationships can be represented by graphs .

You can get more information about Spark at http://spark.apache.org/