A lambda expression can be defined as a concise representation of an anonymous function that can be passed around: it doesn’t have a name, but it has a list of parameters, a body, a return type, and also possibly a list of exceptions that can be thrown.

Lambda expressions are anonymous functions which are like methods but without a class. But like a method, a lambda has a list of parameters, a body, a return type, and a possible list of exceptions that can be thrown. Thus a lambda expression can be passed as argument to a method or stored in a variable.

The pattern of a lambda expression is:

Example of lambda expressions and their equivalent methods

Lambda Expressions can be used in:

Method reference is an important feature related to lambda expressions. It provides a way to a method without executing it. In order to that a method reference requires a target type context that consists of a compatible functional interface. The only condition that the methods need to follow is that they should be assignable to any FunctionalInterface.

There are three main kinds of method references:

The rules for construccion of method references from lambda expressions are shown in the following image: 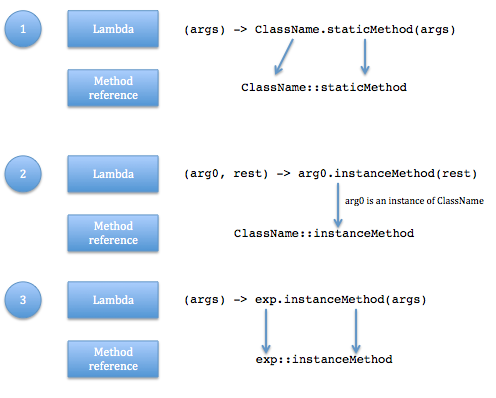 An example of method reference is:

You can also use a reference to a constructor in the same way as a static method by using the name new. For example:

Examples of valid and invalid references to variables in lambda expressions:

You have to be aware that mutating variables in a lambda expression is not thread-safe. Consider a sequence of concurrent tasks, each updating a shared counter.

Note that the variable odds is effectively final. In our case, odds always refers to the same ArrayList object. However, the object is mutated, and that is not thread-safe. If multiple threads call add, the result is unpredictable.

Perhaps, one good solution for this problem would be use thread-safe counters.

In a lambda expression, you can reference an external variable using this. this refers to the enclosing object, not the lambda itself. this in a Lambda refers to the object of the surrounding scope.

Example of this in a lambda expression

In JDK 8 we can use the new methods to eliminate the frequent need for loops.

Because of a lambda expression provides behaviour and not a value, it is very useful for conditional uses of data. For example, let’s consider the example of logger class. With

createFinestLogMessage() is always called, even when not required. New methods in Logger class take a Supplier as an argument (which is a functional interface). The next simple change

has a big impact in performace, because createFinestLogMessage() is executed if finest method needs it.